In the next 4 parts of this series, we look at various ring signature schemes and prove their security in the RO model. This part is dedicated to the analysis of a generic class of ring signature schemes introduced in [1] and inspired by [2]. We also introduce a specific instance of the generic scheme which is itself a generalization of the non-interactive Schnorr signature.

The scheme is built on a security parameter

, which by design corresponds to the length in bits of the output of the random oracle

By design, we require that the probability of selecting any particular

. For example, consider the finite field

over a large prime

. The probability of choosing a particular value for

in the mutiplicative cyclic group

(assuming a uniform distribution over

). Clearly, this is less than or equal to

is specific to the particular instance of the generic scheme being used. In what follows, we build a simulator for the case of a Schnorr ring signature.

The Schnorr ring signature scheme is built on the finite field

is a large prime number and

is the security parameter as described earlier. We let

be a generator of the multiplicative cyclic group

be a ring of

has an associated key-pair given by (

). The Schnorr ring signature scheme is defined as a set of 3 algorithms:

Note that this scheme satisifies the correctness property. That means that any signature generated by

will satisfy the verification equations with overwhelming probability. To see why, let

be a signature issued by user

. By construction, we automatically have

We can now build a simulator specific to the Schnorr ring signature scheme: 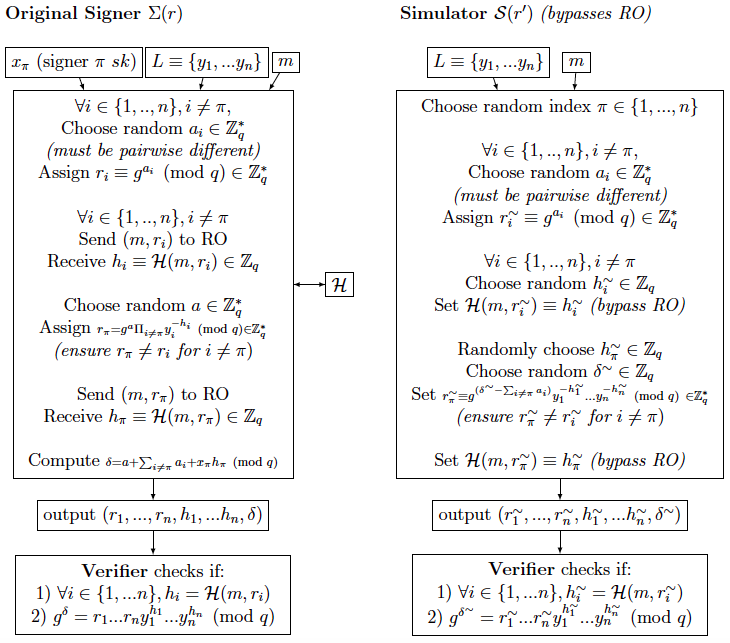 will satisfy the verification equations. Moreover, it assigns a random value for each

adequately built for the Schnorr ring signature scheme, we conclude that (refer to section 6 of part 1 of this series for a justification):

Step 3: We now show that the probability of faulty collisions is negligible (refer to section 6 of part 1 for a description of collision types). The 2 tyes of collisions fo the generic scheme are:

. This is in contrast to the Schnorr signature scheme that we encountered in part 2 of the series, and where the

consisted of a single assignment of the form

. Note that by construction of

‘s corresponding to the

random assignments are pairwise-different and hence distinct from each-other. So in order for a certain

value to appear twice, it must be part of 2 different queries to

We can choose the 2 queries in

ways. And for each one of these 2 queries, the

value can appear in any one of the

assignments. So we get:

Putting it altogether, we find:

which is negligible in k. We can finally conclude (as per section 6 of part 1), that:

is an appropriate index that we will define in the proof. To further simplify the notation, we let

Any successful forgery must satisfy the

. And so we distinguish between 2 scenarios (w.l.o.g. we assume that all

By definition of scenario 2, we know for a fact that

, there exists an integer

to RO. (Recall that

represents the total number of queries that

sends to RO). We define

to be the vector of indices

corresponding to the queries

sends to RO during execution. Note that since we requested by definition that all the

‘s be distinct, then so will the

‘s. By convention, if a certain

is not queried to RO, we let its corresponding

consisting of all vectors

. Referring to the notation used in the splitting lemma (section 7 of part 1), we let:

tuple and such that

That means finding the following probability:

Without loss of generality, let

denotes the index of query

, we can be confident that:

is the secret key corresponding to

) in polynomial time. This contradicts the intractability of DL on multiplicative cyclic groups and we conclude that our signature scheme (in this case the Schnorr ring signature scheme) is secure against EFACM in the RO model.

In this section, we show that our generic scheme satisfies the anonymity definition #1 introduced in part 3 of this series. Recall that roughly speaking, this definition mandates that the probability of guessing the real signer be

-ring setting). This probability is independent of any knowledge about any member’s private key. In other terms, even if a signer is coerced or subpoenaed to release her private key, nothing can be done to prove that she is the real signer (with probability better than random guessing).

To prove anonymity in our case, we show that any signature could have been created with equal probability by any of the

members of the ring. We show that releasing information about the secret key of any ring member does not modify this probability. That automatically implies that even when a subset of private keys gets compromised, there is still an equiprobable likelihood that the signature was created by any member.

be a valid signature on message

. That means that all

Note that once the

‘s are calculated, the

‘s will be automatically determined since we are using a specific hash function. Clearly, the above probability does not depend on any specific information about member

. It is the same for all ring members.