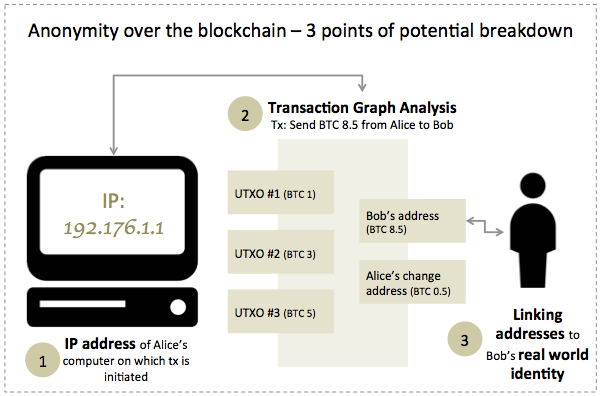 Transaction propagation and IP revelation: The Bitcoin network is a peer to peer network (P2P) where members are connected to other members via an unencrypted Transmission Control Protocol (TCP) channel. In essence, TCP establishes a reliable connection between hosts that communicate using the Internet Protocol (IP), in order to transmit byte-format information between relevant applications. Members of the bitcoin P2P network, also known as nodes, maintain a list of the IP addresses of each host and node that connects to them. Some of these nodes are open to incoming connections while others do not accept new connections beyond the ones they already have. At the time of writing, there were circa

reachable nodes [1]. Note that this figure refers to accessible nodes not hiding behind a firewall, and that the cumulative number of nodes is likely to be much higher.

When a Bitcoin transaction is created, it is shared with all the nodes that the originating host (e.g., computer) connects to. The transaction is subsequently propagated to the remaining nodes in a cascade fashion whereby each one sends it to its sub-network of connected peers. Recall that each node maintains a list of the IP addresses of hosts that connect to it. Consequently, if a node could confirm that its incoming connection was actually the originator of the transaction (as opposed to being a mere intermediary), it could look-up the IP address associated with it and match it to the transaction. Clearly, this would jeopardize Bitcoin’s presumed anonymity.

The above attack could be achieved in principle and has been analyzed in e.g., [2]. One way would be for the attacker to connect to a statistically significant number of the network’s nodes, such that when the attacker detects a new transaction (i.e., never seen before) from an incoming connection, it can assume with a certain degree of confidence that it corresponds to the originating host. The attacker could then match the host’s IP to that particular transaction. There are ways to mitigate a possible IP breach, including e.g., the use of a VPN or a Tor browser to connect to the Bitcoin network. However, both have limitations and the interested reader could consult e.g., [3] for information about the shortcomings of a Tor connection.

The IP exposure threat is not limited to Bitcoin. It applies to other blockchain-based platforms including Monero. To address this risk, the Monero community of developers is working on the implemention of Kovri. At a high level, it is an anonymity technology built on the Invisible Internet Project (I2P) that uses sophisticated routing techniques to conceal the user’s geographical and IP addresses [5]. (Note that we did not discuss Kovri’s details in this series. It warrants an article in its own right)

Bitcoin transaction information including inputs, outputs and amounts are made available on the blockchain. An important advantage of this transparency is that adequate nodes can validate honest transactions and reject instances of double spending and fraud. However, it also weakens the anonymity of users. In particular, anyone can leverage open information to cluster Bitcoin addresses that belong to the same user. By tying any of these addresses to the user’s real identity, an attacker would also be tying the full cluster. This grouping can be done through a transaction graph analysis [6], [7]. Some simple clustering techniques include:

There are some mitigation techniques to strengthen anonymity in so far as the transaction structure is concerned, but their effectiveness is not always guaranteed:

Linking addresses to real-world identity Transaction graph analysis reveals insightful connections at the level of inputs and outputs that allowed targeted clustering, but did not help in establishing a link between a cluster member (i.e., a Bitcoin address) and its real-world counterpart. However, it is relatively feasible to establish such a link. In what follows, we highlight three practices that facilitate it. When coupled with clustering analysis, this could reveal significant insight into the wealth and activity of individuals or entities, a consequence that a number of users might not be comfortable with:

Some individuals might not care about anonymity, in which case the above limitations may be discarded. For the others however, mitigating anonymity threats on the Bitcoin network are likely to prove challenging. Monero’s value proposition is to offer a more anonymous and confidential platform that does not require the user to engage in additional mitigation techniques:

By design, a Monero user is associated with a secret key pair

only known to her, and a corresponding public key pair

that can be publicly shared. Monero keys are hence twice as long as their Bitcoin counterparts. The larger size requirement is tied to the stealth address system as will be explained shortly. We refer to

as the viewing key and

as the spending key, for reasons that will become obvious in what follows.

The cryptographic constructs underlying the stealth address system are all built on the same algebraic structure introduced in earlier parts. In particular, we let

be a large finite group generated by the same elliptic curve introduced in part 5 (refer to the post entitled Elliptic Curve Groups for an introduction to this topic). The curve’s equation is given by:

For completeness purposes, we recall that the above equation is a polynomial over

is a very large prime and

is a pre-defined element of

. We simplify the notation and refer to the group generated by this elliptic curve as

. We also observe the following:

A stealth address is a unique address derived from a one-time public key that senders automatically generate on behalf of their intended receivers. As a result, any transaction is always characterized by a unique receiving address. To generate a stealth address, the sender relies on two pieces of information:

Suppose Alice wants to send a certain amount of XMRs to Bob. Without loss of generality, suppose that Alice will transfer her spending control over XMRs locked in her UTXOs #1 to Bob. Clearly Alice knows the private key associated with UTXO #1 and can sign it and conceal the amount using ringCT (refer to part 9). However, Alice needs to know the recipient address. To that end, she will engage in an address creation process generated from a unique one-time public key specific to the current transaction. Assume that Bob’s public key pair is

and his corresponding secret key pair is

Alice does the following:

We conclude that the probability of stealth address collision is negligible. Consequently, we are justified in assuming that the procedure yields unique addresses.

On the receiving end, Bob has two crucial tasks:

Detection: All Monero users actively listen to every transaction on the network and calculate:

In the case of Bob, this is equivalent to:

then the listener assumes that the transaction is destined to him and that he is the legitimate owner (the probability that at least two listeners compute the same value is negligible as we saw earlier). Anyone who has knowledge of the pair

can perform the calculation and conclude that Bob is the intented recipient. This pair is refered to as a tracking key and

is known as the view key (hence the subscript

One implication is that if Bob does not have the computational capacity to actively listen on the network, he could delegate that process to a third party by sharing his tracking key. Another implication is that Bob could release his tracking key to an auditor or to a court of law in case of a subpoena for them to check all his incoming transactions. Clearly this renders all of Bob’s incoming addresses linkable, significantly reducing his anonymity.

Spending: Unlinkability is not tied to spendability. By releasing the tracking key, Bob is not relinquishing spending control over the XMRs that he received. This is because spendability requires knowledge of the secret key associated with

is not enough to calculate it. Indeed, the secret key is given by

which requires knowledge of

is known as the spending key, and

The two functions of detecting ownership and spending funds justfy the usage of the dual key structure in Monero and hence the need to have addresses twice as long as in Bitcoin. We summarize below the stealth address construct: 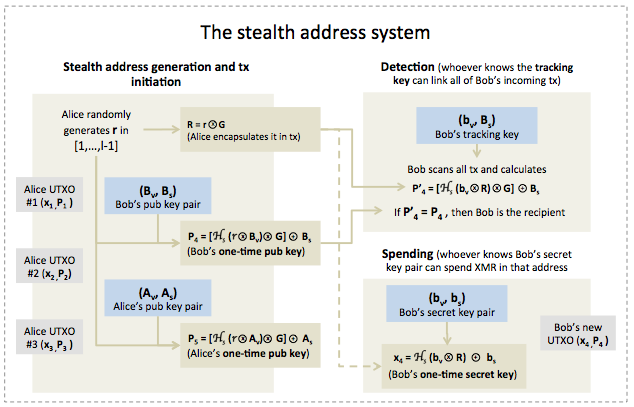 [2] A. Biryukov, D. Khovratovitch, and I. Pustogarov. Deanonymisation of clients in bitcoin p2p network. ACM Conference on Computer and Communications Security, 2014.

[3] A. Biryukov and I. Pustogarov. Bitcoin over tor isn’t a good idea. IEEE Symposium on Security and Privacy, 2015.