Group, field and elliptic curve theories make a regular appearance in the study of crypto-assets including but not limited to cryptocurrencies. For example, the security strength of a number of crypto-specific primitives relies on the math of elliptic curve groups over finite fields. These groups constitute a robust infrastructure to generate adequate public keys from private ones.

Groups and fields are foundational pillars of modern algebra. While in elementary algebra we rely on common arithmetic operations (e.g., addition and multiplication of real numbers), in modern algebra we raise further the level of abstraction. In particular, we introduce more general counterparts to real number addition and multiplication and define them over more general sets. An important objective is to study the common properties of all sets on which a fixed number of operations are defined. These operations tend to be interrelated in some definite way (e.g., distributivity of multiplication over addition).

In this post, we provide a concise (but by no means comprehensive) introduction to group and finite-field theory at the level needed to better appreciate the mathematical foundation of crypto assets. In a subequent post we build on this material to introduce elliptic curve groups defined over finite fields. The interested reader could consult e.g., [1] for a deeper dive on the theory of finite fields and its applications.

A group is a set

together with a binary operation

If in addition, the group satisfies the commutativity property:

The aforementioned four axioms have an equivalent formulation in which the closure and existence of inverse properties get substitued with the permutation property. The axiomatic formulation becomes:

Proving that the permutation property holds is equivalent to showing that

is a bijection such that the domain

are one and the same. To see this, note that

by definition. Since the permutation property holds, then

In order to demonstrate that the existence of inverse property holds, we still have to show that

To do so, consider the set

. By the permutation property, we know that

By invoking the associativity property, we can write

The alternative axiomatic definition paves the way to a convenient representation of a group using a Cayley table. Let

The Cayley table is simply: 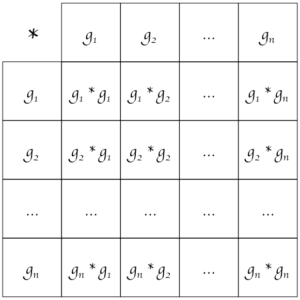 One can observe that the

row in the table above is none other than

which corresponds to a specific permutation of

Group examples abound. In this post, we limit ourselves to two examples of particular importance: the group of integers modulo

and the group of powers of an arbitrary element of some group. The importance of the former is partly derived from its role in building the canonical example of a finite field whenever

is a prime number (see section 8 below). Finite fields are of great significance in crypto in particular because the Discrete Logarithm (DL) problem is thought to be hard on their multiplicative subgroup. This intractability is at the heart of the security strength of a vast number of crypto primitives. The importance of the latter example comes from its crucial role in the study of cyclic groups, regularly used in the context of crypto.

In order to define the group’s underlying set and corresponding binary operation, we will need to introduce the notions of equivalence relation, equivalence class, and modulo arithmetic.

We are now in a position to define our first group example. Consider the set

One can easily see that

satisfies all three properties of an equivalence relation. We can therefore define equivalence classes on

under the equivalence relation

the equivalence class of

form a partition of

and can be listed as follows:

and define the binary operation

This relationship does not depend on a particular element within a given equivalence class. Indeed, let

is an abelian group. To prove this, we show that it satisfies the group axioms:

Example 2: The group of powers of an arbitrary element of some group

be a group and

Consider the set of all powers of

is a group. To prove it, we show that

is a group. A subgroup is mandated to be a group with respect to the same operation of the parent group. A direct consequence is that the identity element of

is the same as that of

previously introduced, is a subgroup of

is a subgroup of

one can define a relation on

is an equivalence relation on

because it has all three desired properties:

induces a partition of

we denote its corresponding equivalence class by:

By virtue of being a group,

. A direct consequence is that for any subset

will also be a permutation of

This shows that every left coset of

has the same cardinality as

We now state and prove a foundational theorem of group theory known as Lagrange’s theorem.

Lagrange’s theorem: The order of (i.e., the number of elements conained in) any subgroup

divides the order of

Proof: Consider the equivalence classes generated by the relation

as previously defined. The classes form a partition of

Moreover, they all contain the same number of elements as

(as we just proved). We can then write:

= (# of equivalence classes generated by

Cyclic groups play a fundamental role in in the construction of secure cryptographic primitives used in e.g., cryptocurrencies. For one thing, a generator of a cyclic group is usually used as a base point to build public keys out of private ones. But most importantly, the security of a number of crypto primitives relies on the presupposed intractability of the Discrete Logarithm problem (DL) on certain cyclic groups. These include e.g.,

We say that a group

is cyclic if and only if it can be generated by at least one of its elements, called a generator. In other words:

In what follows, we state and prove relevant results about cyclic groups in general.

When comparing the structures of two groups, the mappings between them that preserve their respective operations take on an important role.

is called a homomorphism of

if it preserves the operation of

In the context of crypto, an important application of group homomorphism takes the form of a Pedersen Commitment. In Monero for example, Pederson Commitments are used to hide the value of a transaction (refer to Part 8 of the Monero series for a detailed explanation).

is also bijective, then it is called an isomorphism. In this case,

can be thought of as equivalent. Group isomorphisms are a special instance of the more general theory of categories and functors. The objective of the theory is to elucidate structural similarities that exist between various areas of mathematics. On a more subjective note, it may be one of the most beautiful theories of mathematics. For a very concise yet clear introduction, the interested reader may consult section 10 of [2].

More specifically, a field is a set endowed with the notions of addition and multiplication as well as with their respective inverses subtraction and division.

Formally, a field is a set

with at least two elements and two binary operations

It is common to refer to

as the field’s addition and to

as the field’s multiplication.

One implication of the aforementioned axioms is that

0. To see this, note the following:

Being an element of

admits an additive inverse (i.e., with respet to

). As a result of cancelling

from each side of the above equality, we get 0

is the number of elements that it contains.

is called a finite field if its order is finite. The theory of finite fields is rich and beautiful. One of its most important results states that finite fields can only have orders of the form

is any prime number and

any positive integer. Moreover, it turns out that all fields that contain the same number of elements are equivalent.

one will need to study prime polynomials over finite fields, which is out of scope. Nevertheless, we will introduce the case of

corresponding to the most basic type of a finite field, namely the field

It is the canonical example of finite fields of prime order

We introduce a multiplicative operation on

and defined as follows:

Note that this relationship does not depend on a particular element within a class. Indeed, let

is a field if and only if

were not prime. We will show that

would fail to satisy the closure axiom and as a result, would not be a group. Indeed, since

is composite, we can write

is a prime number. We have:

is an abelian group: We previously proved in section 3 that this result holds for any positive integer

and so holds true in particular when

is a prime. Its identity element is

is an abelian group. We prove that it satisfies all five group axioms: