In the next few parts of this series, we look at various signature schemes and prove their security in the RO model. This part is dedicated to the analysis of Pointcheval and Stern Generic Signature Scheme of which the Schnorr scheme is an example. The generic scheme is built around a single

pair. Later parts of this series will focus on ring signature schemes. Ring signatures embed the actual signer in a ring of other possible signers to hide her identity. We will discuss them in parts 3, 4, 5, 6, and 7.

For a given message

, our generic scheme creates a signature

is a random element chosen from a pre-defined set,

is fully determined by

. By design, we require that the probability of selecting any particular

for a given security parameter

Schnorr’s signature scheme is an example that fits this generic model. To see why, recall that

is a pre-defined prime number. It then assigns

denotes a chosen generator of

can be any element of

. By design, we choose the security parameter

guarantees that the aforementioned probability is upper-bounded by

is specific to the particular instance of the generic scheme being used. In what follows, we build a simulator for the case of a Schnorr signature. 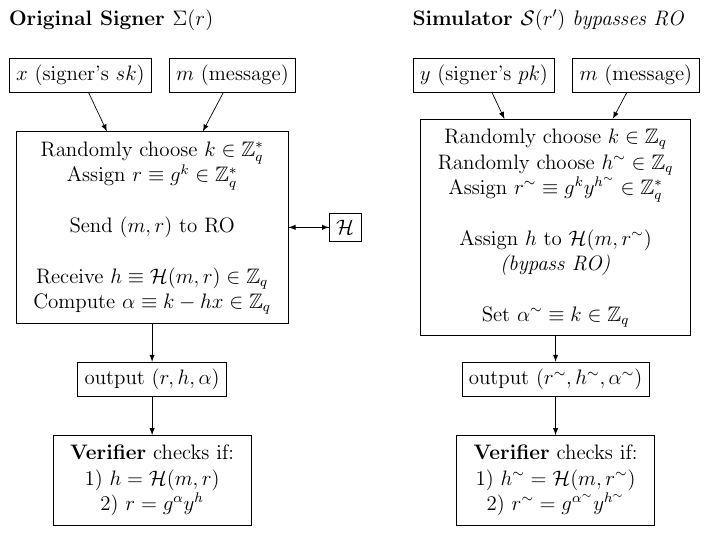 will satisfy the verification equations. Moreover, it assigns a random value for

adequately built for the Schnorr scheme, we conclude that (refer to section 6 of part 1 of this series for a justification):

Step 3: We now show that the probability of faulty collisions is negligible (refer to section 6 of part 1 of this series for a description of collision types). The 2 types of collisions fo the generic scheme are:

(negligible in k).
We can finally conclude (as was shown in section 6 of part 1), that:

is an appropriate index that we will define in the proof. And to further simplify the notation, we let

. So we distinguish between 2 scenarios (w.l.o.g. we assume that all

to be the index of the query

to RO during execution. We let

was never asked by

consisting of all indices that meet the

Referring to the notation used in the splitting lemma (section 7 of part 1), we let:

. That means finding the following probability:

queries, we can be confident that the first

queries sent to the 2 ROs are identical. In particular the two

queries are the same (i.e.,

is the secret key of the signer whose signature

is forging), we get:

) in polynomial time. This contradicts the intractability of DL on multiplicative cyclic groups and we conclude that our signature scheme (in this case the Schnorr’s scheme) is secure against EFACM in the RO model.